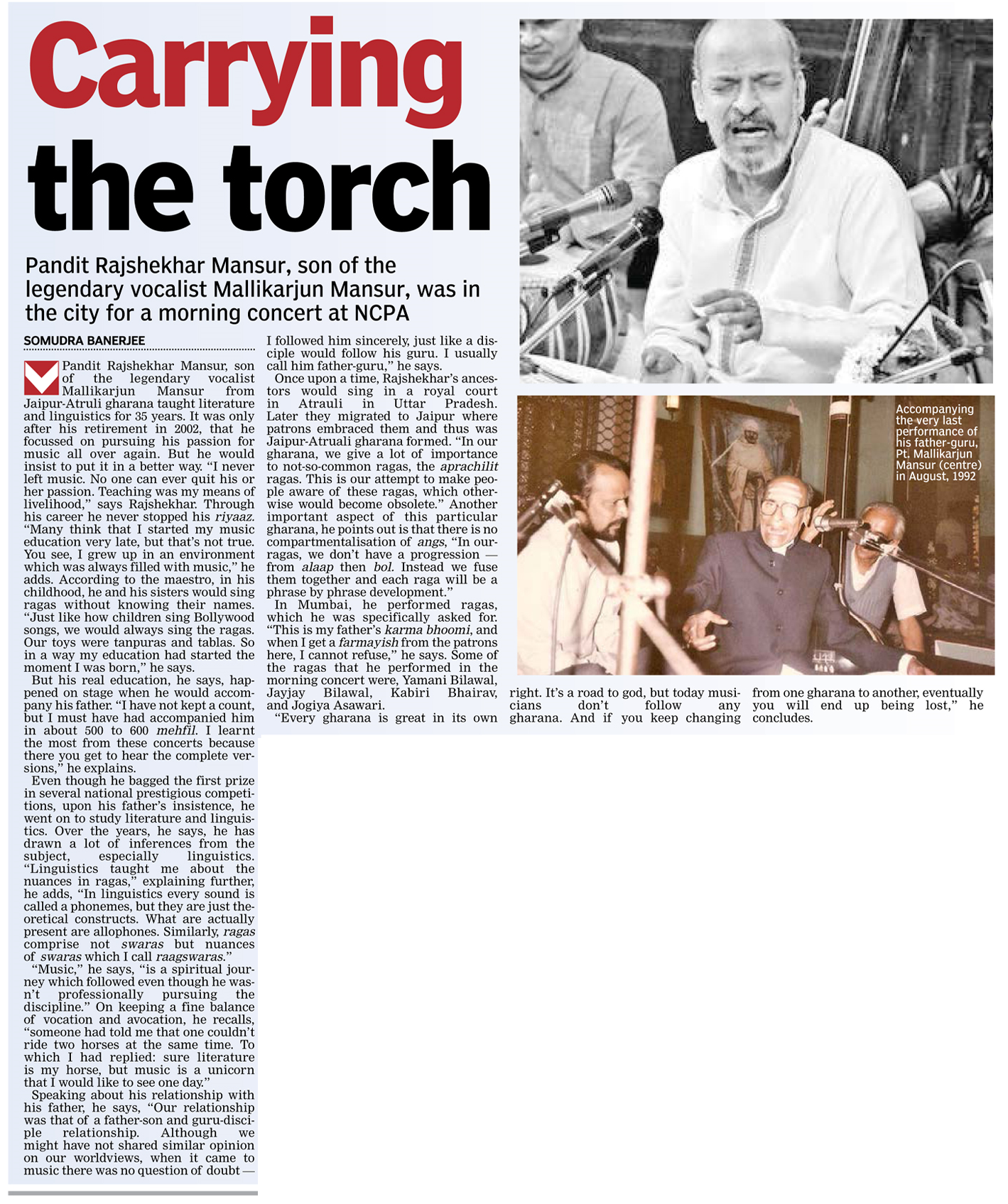 Pandit Rajshekhar Mansur, son of the legendary vocalist Mallikarjun Mansur, was in the city for a morning concert at NCPA

Pandit Rajshekhar Mansur, son of the legendary vocalist Mallikarjun Mansur from Jaipur-Atruli gharana taught literature and linguistics for 35 years. It was only after his retirement in 2002, that he focussed on pursuing his passion for music all over again. But he would insist to put it in a better way. “I never left music. No one can ever quit his or her passion. Teaching was my means of livelihood,” says Rajshekhar. Through his career he never stopped his riyaaz. “Many think that I started my music education very late, but that’s not true. You see, I grew up in an environment which was always filled with music,” he adds. According to the maestro, in his childhood, he and his sisters would sing ragas without knowing their names. “Just like how children sing Bollywood songs, we would always sing the ragas. Our toys were tanpuras and tablas. So in a way my education had started the moment I was born,” he says.

But his real education, he says, happened on stage when he would accompany his father. “I have not kept a count, but I must have had accompanied him in about 500 to 600 mehfil. I learnt the most from these concerts because there you get to hear the complete versions,” he explains.

Even though he bagged the first prize in several national prestigious competitions, upon his father’s insistence, he went on to study literature and linguistics. Over the years, he says, he has drawn a lot of inferences from the subject, especially linguistics. “Linguistics taught me about the nuances in ragas,” explaining further, he adds, “In linguistics every sound is called a phonemes, but they are just theoretical constructs. What are actually present are allophones. Similarly, ragas comprise not swaras but nuances of swaras which I call raagswaras.”

“Music,” he says, “is a spiritual journey which followed even though he wasn’t professionally pursuing the discipline.” On keeping a fine balance of vocation and avocation, he recalls, “someone had told me that one couldn’t ride two horses at the same time. To which I had replied: sure literature is my horse, but music is a unicorn that I would like to see one day.”

Speaking about his relationship with his father, he says, “Our relationship was that of a father-son and guru-disciple relationship. Although we might have not shared similar opinion on our worldviews, when it came to music there was no question of doubt — I followed him sincerely, just like a disciple would follow his guru. I usually call him father-guru,” he says.

Once upon a time, Rajshekhar’s ancestors would sing in a royal court in Atrauli in Uttar Pradesh. Later they migrated to Jaipur where patrons embraced them and thus was Jaipur-Atruali gharana formed. “In our gharana, we give a lot of importance to not-so-common ragas, the aprachilit ragas. This is our attempt to make people aware of these ragas, which otherwise would become obsolete.” Another important aspect of this particular gharana, he points out is that there is no compartmentalisation of angs, “In ourragas, we don’t have a progression —from alaap then bol. Instead we fuse them together and each raga will be a phrase by phrase development.”

In Mumbai, he performed ragas, which he was specifically asked for. “This is my father’s karma bhoomi, and when I get a farmayish from the patrons here, I cannot refuse,” he says. Some of the ragas that he performed in the morning concert were, Yamani Bilawal, Jayjay Bilawal, Kabiri Bhairav, and Jogiya Asawari.

“Every gharana is great in its own right. It’s a road to god, but today musicians don’t follow any gharana. And if you keep changing from one gharana to another, eventually you will end up being lost,” he concludes.