“Gharanas were systems of singing, constructed by great thought and deliberation behind them. It was not that a master sang and it automatically became a gharana” – Pt. Mallikarjun Mansur 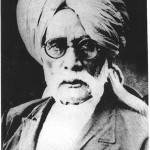 The Jaipur-Atrauli gharana (also known as the Jaipur Gharana, Atrauli-Jaipur Gharana, and Alladiyakhani Gharana) is a Khayal-based stylised singing family-hood (gharana), founded by Utd. Alladiya Khan (1855–1946) in the late 19th century. His family belonged to Atrauli near Aligarh, and subsequently migrated to Jaipur, giving the gharana its name.

Evolved from Dhrupad singing, the Jaipur-Atrauli Gharana acquired its name and status as a Gharana in the early half of the 20th century as a result of the growing popularity of stalwarts of this Gharana, like Smt. Kesarbai Kerkar, Smt. Mogubai Kurdikar and Pt. Mallikarjun Mansur. The founder of this gharana, Utd. Alladiya Khan initially developed the unique Gayaki of this Gharana following the loss of his voice which prompted him to develop an adjusted singing style to accommodate his ailment.

The Jaipur-Atrauli gharana acquired its name and status as a Gharana from the time of Alladiya Khan in the early half of the 20th century. This Gharana mainly evolved from Dagar-bani of Dhrupad, however it also absorbed finer essence of Gauhar-bani and Khandar-bani.

The ancestral origin of the Jaipur-Atrauli Gharana was said to be from Nath Vishwambhar, noted for setting to Raags the tunes of the shlokas in his puja. The great musician composer Swami Haridas was also born in this family and the great Tansen and Baiju were his pupils.

Natthu Khan and Mantol Khan were two stalwarts of this Gharana, four to five generations down the line. They imbibed the practices of both Hindu and Muslim traditions. Alladiya Khan, for instance, wore the Janva (sacred Hindu thread) all his life, dressed like a Maharashtrian, complete with the Kolhapuri turban, yet did not skip a day of his Namaaz (Muslim prayer). His compositions praise Mahadev (Shiva) and Allah with equal fervor.

Many of the Raags and compositions sung in the Jaipur gharana come from the tradition of Haveli Sangeet, like the compositions “Deva Deva Satsang” in Raag Savani Kalyan, “Aadidata Ant” in Raag Malkauns, “Anahat Aadi Naad” in Raag Savani Nat, “Devta Aadi Sab” in Raag Kukubh Bilawal, “Devi Durge” in Raag Sukhiya Bilawal, and a host of others in which Hindu devotional themes were used by Utd. Alladiya Khan.

Scholars say the hyphenated moniker of this Gharana recognises that Jaipur-Atrauli Gharana musicians originally came from Atrauli near Aligarh (in Uttar Pradesh) and migrated to the court of the Maharaja of Jaipur, their principal patron.

Others say they came to the Jaipur Maharaja’s court and then dispersed to various other courts in the area, like Jodhpur, Uniyara, Bundi, Atrauli etc. After establishing himself in the north, Utd. Alladiya Khan migrated to the court of Shahu Maharaj in Kolhapur and became his court musician.

Utd. Ghulam Ahmad “Alladiya” Khan was initiated into music by his father, Khwaja Ahmad Khan and his uncle, Jehangir Khan in both the Dhrupad and Khayal styles. He also had the privilege of being guided by two famous composers of the time, Ramzan Khan “Rangeele” and Mehboob Khan “Darasapiya”. The young Alladiya Khan was closely associated with Behram Khan Dagar at Udaypur and Jaipur Wazir Khan “binkar” at Indore and Bombay. Today, mainly the Khayal tradition remains. He was known to have been greatly influenced by Utd. Mubarak Khan’s style of Taans to some extent.

Most gharanas apply notes in simple succession in aalap and taan, whereas in the Jaipur gayaki, notes are applied in an oblique manner with filigree involving immediately neighbouring notes. Instead of the flat taan, gamak (taan sung with double notes with a delicate force behind each of the component double-notes of the taan) makes the taan spiral into seemingly never-ending cycles. Meend in aalap and gamak in taan are the hallmark of this gayaki. To his immense credit, the great exponent of Kirana gharana, Bhimsen Joshi is one of the very few singers outside the Jaipur gharana, who tried to adopt the gamak taan to an extent, complete with long, uninterrupted patterns clearly showing an amazing breath capacity much like the old masters of Jaipur gharana, but he has not quite achieved the intricacy and grace of gamak that is the signature of Jaipur. Sharp edged harkats and murkis (crisp, quick phrases to ornament the alaap) are relatively uncommon.

Not only are the notes sung in rhythm with the taal but progress between the matras (beats) is in fractions of quarters and one-eighths. While being mindful of so many factors, musicians of this gharana still have a graceful way of arriving at the Sam without having matras to spare! This is particularly evident in the way bol-alaap or bol-taan is sung, where meticulous attention is given to the short and long vowels in the words of the bandish that are being pronounced, and the strict discipline of avoiding unnatural breaks in the words and in the meaning of the lyrics. No other gharana has paid so much attention to the aesthetics and laykaari in singing bol-alaaps and bol-taans.

A highlight of Jaipur gayaki is the mastery over Jod Raags (mixed or hybrid Raags; a blend of multiple Raags that form one Raag). Singers from other Gharanas tend to sing one Raag in Aaroh (ascent) and the other in Avaroh (descent). Some others sing one Raag in the lower half of the octave and then switch to the other Raag in the upper half. Alternatively, they may sing alternate phrases of the two component Raags. In Jaipur Gayaki, there is such perfect fusion of the two raags that it sounds like a homogeneous Raag in its own right, giving the feel of both component raags, not as a heterogeneous mixture cobbled together. The listener hears an amalgam of both raags without losing their distinctive identity.

Alladiya Khan introduced many lesser-known or obscure raags in his repertoire like Raag Basanti Kedar, Raag Jait Kalyan, Raag Kafi Kanada, Raisa Kanada, Raag Basanti Kanada, Raag Savani Nat, Raag Savani Kalyan, Raag Bhoop Nat, Raag Nat Kamod, Raag Bihari, Raag Khat, Raag Khokar, Raag Sampoorna Malkauns, and many others. Trying to imbibe all these characteristics without losing the aesthetics is a tall order for any musician. Hence this Gayaki is called a thinking listener’s or connoisseur’s Gayaki. However, it gives equal pleasure to the uninitiated listener who may not understand the technical intricacies, but responds to the layakari and the melodic content of the presentation.