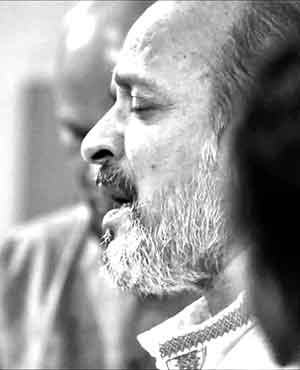 Music always formed a part of my life right from childhood. I woke up to and went to sleep hearing my father do his riyaaz. The sensory effect of the sounds I heard in childhood stayed with me and made a deep impression on me.

Pt Rajshekhar Mansur was born into a musical family on December 16th, 1942 in Dharwad, Karnataka. As the son and disciple of Pandit Mallikarjun Mansur, his musical journey began early. He imbibed his father’s music and the nuances of the Jaipur Atrauli gharana while a child by listening to his father sing and perform at home and elsewhere. His formal training with his father and guru began at the age of 16 which furthered his immersion into the Jaipur Atrauli Gayaki.
Pt. Rajshekhar Mansur has accompanied Pt. Mallikarjun Mansur for 30 years on various platforms across the country. His taalim, in keeping with the guru-shishya parampara, progressed in the course of everyday life – living, traveling and performing with his guru.

Pt. Rajshekhar Mansur pursued his teaching career as a professor of English at the Karnatak University, Dharwad, while also dedicating himself to music. He holds an M.A. in English Literature and an M.A. in Linguistics from the University of Wales. In his career as professor that spanned 35 years, he has guided innumerable students for M Phil and doctoral programmes while also furthering his training and performing along with his father and guru.

I still remember the head of my English Department (whom I admired for his scholarship in Literature) telling me the first day I joined my service “Mansur, please remember one cannot ride two horses at the same time.” I remember what I said then. “With due respect, Sir, for me music is not a horse to ride. It’s a unicorn I am trying to see. I need to ride only one horse of Literature with your guidance. A beautiful, mysterious and wondrous Unicorn, it still is for me because I consider myself still as a ‘saadhak’, a seeker. And this journey has given me the greatest happiness in life.”

He has translated Pt Mallikarjun Mansur’s Autobiography Rasa Yatra – My Journey In Music from Kannada to English in 2005.

Panditji is ranked as a Top Grade Vocalist in AIR & Doordarshan. He continues to perform and pursue his music, which he believes is his lifelong tapasya.

“He (my father) was a lover of the aesthetics in our singing and taught me to appreciate the beauty inherent in our music.”

He has kept alive the Jaipur Atrauli tradition of Aprachalith and Durlabh Raagas in his concerts over the years by rendering ragas such as Ramsakh, Lacchasakh, Goundgiri Malhar, Dhawalashri, Meghavali, Godhan Gouri, Nat Narayani and many others.

He has also performed in several AIR and Doordarshan National Programmes.

As a music educator

Old masters rightly believed that music is a ‘shravana Vidya’, a Vidya of diligent and careful listening. As the learner progressed, the guru would draw his attention to the subtle nuances which could not be spelt out but only carefully heard and imbibed.

Panditji is a dedicated teacher, with disciples in India and abroad. Over the past 25 years he has trained several disciples, some of whom are accomplished musicians and performers.

He firmly believes that music is vidya that has to be imbibed through the guru shishya interaction which draws its sustenance from the foundations of the gharana. His focus is on inducting the student into the nuances of the form that is characteristic of the Jaipur Atrauli Gharana.

Pt Rajshekhar Mansur has conducted lecture demonstrations on Aprachalith and Durlabh Raagas (that are an intrinsic part of the Jaipur Atrauli repertoire) as part of Spic Macay as well as in other platforms hosted by prestigious organizations such as the theatre institute Ninasam (Heggoddu), Madhukali (Indore), and other venues across India. Some of these dialogues on Aprachalith and Durlabh Raagas are available on YouTube.

He has released a two volume collection of his recordings In the Foot Steps and Beyond and Shatanamanam to commemorate the centenary celebrations of Pt Mallikarjun Mansur.

There are several private recordings, some of which are available on YouTube.